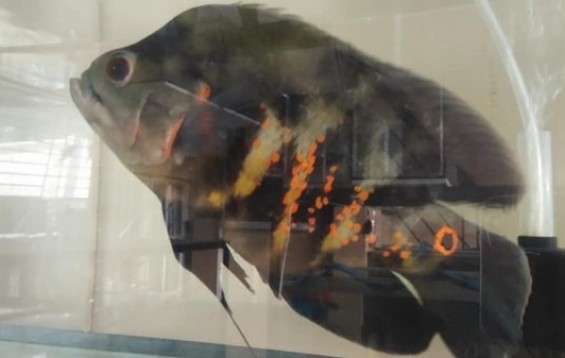 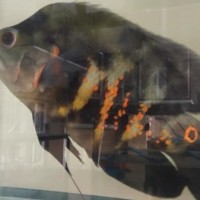 Oscar (Astronotus ocellatus) is a popular tropical aquarium fish species belongs to Cichlidae family which naturally occurs in South American Basin. In addition to that feral populations are also found in Florida, China, and Northern Australia as a result of the ornamental fish trade. They prefer slow moving and still water bodies that are shaded with jungle trees and other vegetation. A. ocellatus specimens are sold in local fish markets and they are considered highly esteemed food fish in South America. Oscars are fast growing fish species; accordingly they reach to 35cm/14” very quickly. Hence they are needed to be accommodated in bigger tanks to stay healthy.

Although wild specimens are dark colored with yellow spots, there are many varieties as a result of selective breeding such as albino, red, red lutino, albino tiger and veil tail in the aquarium hobby. Juveniles; with their white and orange wavy striped bands and spotted heads are more energetic and differently colored than adults.

Oscars are renowned with their intelligence, beautiful appearance and aggressive behavior. Their intelligence and puppy like movements like wagging tail while begging for food have led people to nickname them “Water/river dogs”. They can even taught to be petted by their owners.

Oscars are also called marbled or velvet cichlid due to their color variations.

Oscars hunt various small fish, crayfish, worms, insect larvae, insects and other crustaceans in their natural habitat. Astronotus ocellatus employs a suction mechanism to capture its prey and has been described to display “laying-on-side” akin to Yellowjacket and Livingstone cichlid.

When it comes to feeding them in the aquariums, they are keen to take everything what is put inside the tank. Their extreme appetite should not encourage aquarists to feed them with low nutritional value food. For example they can be occasionally offered feeder fish but not as a staple diet as feeder fish is not nutritionally adequate. Also, Oscars do require vitamin C and would have health problems in its absence.

They can be feed on variety of high quality commercial cichlid pellets/flakes/wafers, brine shrimp, bloodworm, krill and frozen peas.

Because of their size and fast growing tendency, it’s vital that you understand their dietary requirements completely and you should make sure that they are met. A balanced diet is always recommended for Oscars.

Oscars are notoriously difficult to sex because of they are considered sexually monomorphic which means that the male and female look precisely identical, in size, shape and coloration.

Unlike many other fish species male and female Oscars are exactly the same and consequently impossible to sex by visual means.

Ascertaining the gender of an Oscar fish requires time and patience. They cannot be sexed while they are still juveniles. When they are kept in groups while they are still younger, some of them would start to interact with each other and form pairs. They reach to sexual maturity approximately 12-15 months and before that there is really no chance to determine their sexes.

After they form a pair if you can observe them closely while they are laying eggs you can notice that female has a rounded tube protruding from an area close to its anus. The tube of the males is smaller and pointy and resembles a tiny spike.

Another way of determining sex of the Oscar fish is venting. This process could be accomplished by only highly experienced people with a great knowledge about Oscars.

Breeding Oscar Fish is easy if you can find the right pair and provide adequate tank conditions for them. Since they are difficult to sex it is recommended that obtaining 8-10 fish and waiting them to form healthy pairs than removing the others.

The pair would select and clean a flattened horizontal or vertical surface such as a rock to lay their eggs. The female will start swimming back and forth over the designated area to lay her eggs while waggling slightly. The male will follow her and inseminate the eggs. They are known to lay 1000 to 3000 white small eggs which could be noticed if looked carefully. Like most Cichlidae family members Astronotus ocellatus practices brood care and they are good parents.

Both male and female Oscar will fan the eggs just after the spawning to oxygenate them with their pectoral fins. During this process, they also check the eggs and eliminate the ones that in bad condition.

Successfully fertilized eggs would change color from white to light-brown following two-three hours. The eggs will start to hatch after three days and the fry shakes itself to break the shell. The fry which leaves the egg completely will have a yolk sac in its belly that would supply nutrition for four days. Once the yolk sac disappeared the fries need to feed immediately.

Oscar fries can be feed with newly hatched brine shrimp and commercial fish food that is specially produced for feeding fish fry. Removing the parents after the fries can swim freely would help to maintain decent water conditions. This would also help to deliver adequate food to the fries in order to make them grow properly.

Oscars are generally hardy fish and accomplish to stay healthy most of the time. Generally they are susceptible to “hole in the head” disease also known as Head and Lateral Line Erosion (HLLE). HLLE causes cavities and holes across the fish’s head and body. This disease is characteristically caused by poor diet and improper water conditions. Keeping the water in proper condition and a healthy diet which is rich in vitamin C,D, calcium and phosphorus can prevent hole in the head disease in Oscar fish.

Although they are robust species it's recommended to check out always for skin flukes and other parasitic infestations like protozoa, worms, etc., fungal and bacterial infections.

Since Oscars are considered aggressive or semi-aggressive species their tank mates should be carefully selected. While they are eager to devour any fish that they can swallow, housing other aggressive fish species might lead to continuous fights which can lead to injuries even deaths. It is best to keep them in Oscar-only tanks.  Keeping these magnificent creatures in a small tank is nothing than torture to them. While you are adopting these fishes consider that they will grow quickly and the tank which they fit when they are smaller would not be adequate anymore so tank size could be determined generously.