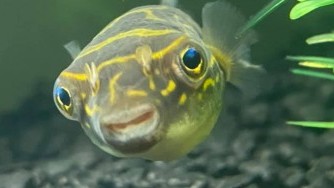 Pufferfish are cute-looking fish with tons of personality. They come in many different sizes and colors. They can be found all around the world, and some species can be challenging to keep in an aquarium. There are over 150 species of pufferfish, some with unique and peculiar hunting techniques.

Keeping freshwater puffers as pets can be very rewarding. It can be mesmerizing watching these fish in action. However, you need to provide them with their basic needs to be successful.

Keep reading the article for more details on how to feed and care for them.

Can Freshwater Puffer Fish Live With Other Fish?

Dwarf puffers can survive well in a sing special only tank with other Dwarf puffers. While this is true with some species, it is not the case with all species. Puffers have individual personalities, thus, keeping different species together can be quite unpredictable in an aquarium. Ambush or lurker species are predators by nature; therefore, keeping them in a tank with other fish is risky. Eventually, they will eat the other fish.

Pufferfish have different hunting techniques, such as:

Although freshwater puffers can appear to be very cute, they are also extremely aggressive. They usually will only puff themselves up with water as a protection mechanism. Their spine protrudes when inflated to prevent predators from eating them.

They also have a deadly neurotoxin referred to as tetrodotoxin, which they use as a defense mechanism from predators. Not all species of puffers are poisonous, and those that produce this venom don't do it directly. They do it by gathering bacteria from their diet in the wild that create tetrodotoxin. However, puffers in the aquarium are toxin-free because they don't have such foods.

It would be best if you also were careful when introducing new things in the aquarium to avoid diseases. Anything that you add to your aquarium can introduce potential bacteria and infection. Puffers are classified as scaleless fish; thus, without this line of defense, it makes them highly susceptible to diseases. For this reason, it is advisable to invest in a good filtration system.

What do Freshwater Puffers Feed On?

These species are found in brackish, marine and freshwaters. Although they are omnivores, they prefer a meat-based diet. Thus when in the wild, they eat crustaceans, shellfish, snails, and fish.

They will feed on anything when you place them in an aquarium. They can eat frozen, live, or dried meat. As they grow, you can give them small frozen fish like whitebait and lancetfish. Offer them plant-based food and vegetable at least once every week.

Every size has its different feeding habits, and you can avoid over or underfeeding them by using the following formulae: