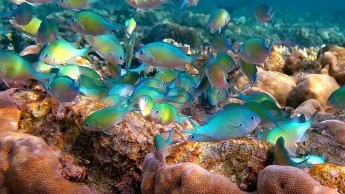 The Chromis fish is one of the most popular fish in the saltwater aquarium hobby. Some of the reasons why Chromis are so popular is because they are hardy fish, low aggression towards other fish, inexpensive, can provide a flash of color, and they do well in schools. The Chromis species, for the most part, are considered reef-safe and should not pick on corals or invertebrates. Chromis are known to put up a good display when in a school, a single Chromis also looks good in an aquarium. Chromis are omnivores, so they feed on both vegetation and animals, but they do well in reef aquariums because they don't bother corals and invertebrates.

The Blue/Green Chromis is one of the most commonly found Chromis in the hobby. They get their name due to depending on the lights and angel that you look at them they could look blue or green. Their natural habitat is the Pacific and the Indian Ocean, as well as the red sea. They tend to do best in groups. They should be kept in groups of at least three of them in a home aquarium. They are not picky eaters and will pick at algae, feed on amphipods, and will take many processed foods. Avoid keeping a Blue/Green Chromis in preditor tanks as this species is likely to be prayed on.

The Purple and Yellow Sunshine Chromis are mostly found in the Atlantic Ocean. They are also called Sunshine Chromis Damselfish, but they are very peaceful, and that makes them a favorite choice for home aquariums. As the name suggests, these fish are yellow with lavender stripes in the middle section of their body. Their stomachs also have white appearances. Like other Chromis species, they are omnivorous and not picky eaters. Expect this fish to swim in the top layer of the water of your aquarium, but you should still keep live rocks in the aquarium to give it a resting place and hide when it feels threatened. As they get older, their color becomes less and less vibrant.

Also known as the Tarnate Damsel, the Lemon Chromis tend to have a metallic silver color with a bright yellow mixture. They are easy to maintain, making them a great addition to any home, and they like to hide under corals when in their natural habitat. Although they are harmless to other smaller fish species, corals and invertebrates, they can become territorial towards other fish when they are older. They are not picky eaters and will eat just about anything you give them.

Another Chromis species worth considering for home aquarium is the Vanderbuilt Chromis. All these fish may need is clean water and a safe hiding place in the form of a rock. They do well on their own and will not harm other species, but they also don't like to feel threatened. They want big spaces to swim in, which means your aquarium should be more significant with at least 30 gallons of water.