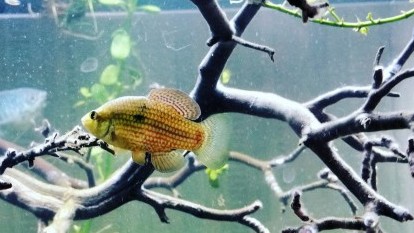 The male and female species have a significant variation in appearance. The females contain a spot on their flanks and another one on the posterior ends of their dorsal fins. Also existing on the dorsal fin is a white margin. From time to time, the fins may display a slightly reddish color. The females have some distinctive turquoise scales but are nevertheless mostly olive in color. Males can also have white and blue stripes alternate on the body, which complement the dark rectangle on their shoulders. Males can also have a dark spot situated in the colored rectangle’s lower posterior corner. For all practical purposes, the olive-grey coloration and pattern of non-dominant species is the most dominant form.

Flagfish are a great choice to manage algae in an aquarium. They are also very tolerant to all forms of diseases and infections.

You can find Flagfish in large numbers throughout the Florida Peninsula. While not their native to Florida, they do well in shallow, well-vegetated freshwater. They are native and located at the confluence of Ochlockonee and St. Johns Rivers. Some subspecies can even live in light brackish water. However, if the salinity spikes (due to water evaporation), it can be hazardous for them.

Are Flagfish herbivores or carnivores

They are both, they are omnivores and feed on both plants and meat. Including plant matter, insects, algae, and crustaceans are all at the top of the list of what they eat in nature. Flagfish usually stay healthier when provided with a wide variety in their diet. They can also live off high quality prepared flakes and the occasional frozen food feeding.

Flagfish tend to breed randomly as long as the ideal water conditions are provided. Compared to the many other relevant species of fish, the flagfish lays the fewest number of eggs. The female lays typical 20 eggs throughout a couple of days. Upon the females laying the eggs, the males will generally come and guard them, and they will attack any fish that comes close or tries to harm them. The males have also been known to feed on the eggs or even their young. It is suggested if you plan to breed them to keep them in a separate breeding tank.