Every Salt Manufactures Has Hickups 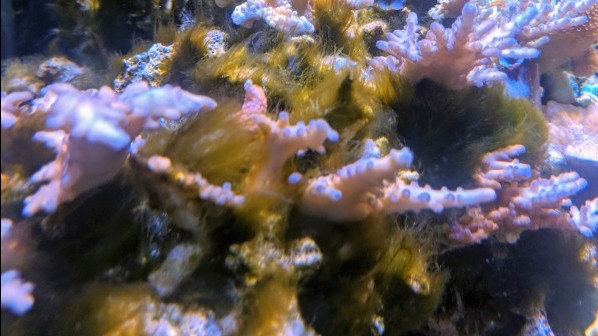 For the last year, I have been battling a huge algae outbreak in my tank, and my father in laws tank — all of the usual algae methods I've used to deal with algae were unsuccessful — from increasing water changes (2-3 20% water changes per week), increasing my clean up crew and chemical war far against the algae.

This article is not to bash salt manufacture, I actually will purposely not mention the salt manufactures name, instead, the article is to give you an idea of what I did to get rid of the algae and also how I determined it was the salts issue.

The algae was requiring weekly manual maintenance to keep it from chocking out the corals. The only thing that seems to make a dent into the outbreak was:

I did this towards the end of the light cycle, so once I was done, the lights went out, then the only light running would be my refugium lights that runs a reverse sequence. I had to do this weekly to prevent the algae from chocking out the corals.

So what all did I try?

Usually doing mass water changes helps everything in the tank, it keeps nutrients down, and the corals tend to blossom even more than usual. The corals looked great, but the algae was also thriving on the water changes, and within the next 24 hours, I would see a massive bloom in the algae. I saw the same thing in my tank and my father in laws tank.

Hiring a Cleanup Crew to Help

I knew that the cleanup crew was not going to eliminate the algae issue. I was hoping it would help with the maintenance I was already doing. So I increased my clean up crew, added more crabs and snails to start. Once I noticed it was not doing enough, I stepped my game up. I rented a Sea Hare from my (LFS), he never touched the algae (which is extremely strange), I took him back and got different, thought maybe he was broken or maybe was currently under a strange diet to prevented him from eating algae. I did not have any luck with three different Sea Hare's. Got a Tang, Lawnmower Blenny, Fox Face, Urchins, etc... No one touched the algae I had to feed sheets of algae to keep them all going.

Chemical Warfare Against the Algae

I used tons of different algae remove products as well as product to increase the good bacteria as products to reduce nitrates and phosphates even though they were all low and truly should not have been causing an algae outbreak. The only thing that seemed even to affect the algae in any way was the Hydrogen Peroxide.

The bad thing about the Hydrogen Peroxide is that I could not use enough of it to kill it off without hurting the corals. I have a mixed reef tank, and if I used more then 1ml per 10-gallons, I would start to see adverse effects on some of the corals.

Soft corals like Xenia did not like the Hydrogen Peroxide at all at any level but would recover within a few days. If I went above the 1 ml per 10-gallons, some of my Montipora would start to bleach out. They would improve after a few weeks, but I had a real scare there for a while.

I tested everything weekly, and everything seemed fine. I bought multiple test kits to verify that one of them was not off. I finally broke down and did an ICP test on my RO water, Freshly Mixed Saltwater and My Tank Water. Everything looked fine nothing out of the ordinary.

About mid-year, I assumed the issue was my salt. So that is why I tested freshly mixed saltwater.

Gain Ground on the Algae

So finally a year later, both my tank and my father-in-law's tank starts to look better. We did the weekly ritual to keep the algae in check, but nothing had changed for a while now. Why did we start to see changes in the results?

I looked into what had changed. I started a new batch of salt from the same manufacturer that I have used for the last five years. My Father-in-law decides to try a different salt to see if it made a difference.

So I used a new batch, and he changed his salt to a different manufacture. All of a sudden, the algae is starting to go away. We no longer see a bloom after a water change.

Before we both used the same salt when the salt when on sale by an LFS, we picked up several boxes each how we knew we were going to need salt.

I think the salt was the issue. I have an ICP test that shows it was okay but its the only thing that has changed. So what about the water source, my father-in-law has city water, and I use well water.

So the only change for both systems was the salt before we start bashing saltwater manufactures, I have been using this salt for over five years, and I have never had an issue like this before. The bottom line is that every manufacturer has had a problem at some point or another.

If I would not have bought the salt in bulk all at the same time to take advantage of the deal the second box most likely would have been from a different batch. I am not claiming that the issues were mine. It wasn't it the manufactures issues.

I still do not know if it was for sure the salt, the ICP test came back fine, but its the only thing that I can come up with. I have also heard horror stories from just about every salt manufacture out there. In the end, it was a bad batch and did not adequately represent a companies ability to produce a quality salt, so unless the manufacturer is having issues repetitively it hard to bash a salt for one bad batch.

Have you had an issue with your salt? Let's hear about it, comment below.

I got into the aquarium hobby in 2004 after I went diving for the first time I knew I wanted a small piece of the ocean nearby to admire at home. I have a tech background, so I enjoy gadgets and automation. I plan to do a planted freshwater tank and play