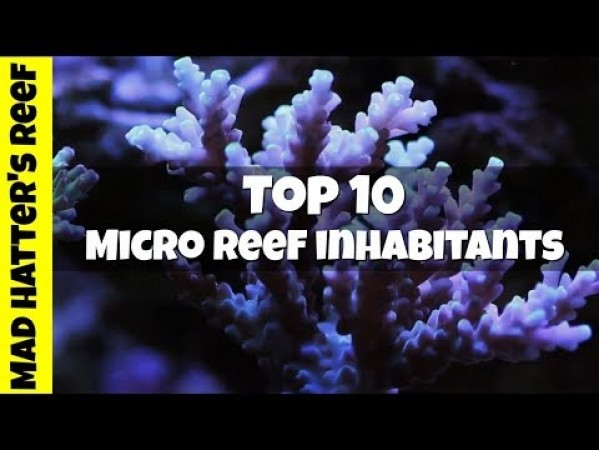 Are you considering setting up a Nano/Pico/Micro Reef Tank? If so Mad Hatter's goes through the top 10 picks for Micro Reef Tank Corals and Invertebrates selected by Coral Magazine.

Any type of Discosoma, Ricordea, and Rhodactic mushrooms. While a hardy coral some species can be more challenging to keep and some grow slower. Mushroom corals have a slime coat that is covered in bacteria. Be safe after handling and make sure to wash your hands thoroughly and always wear appropriate eye protection and gloves when possible.

Emerald Carbs can be fun to watch when they are out. They are nocturnal so you may only see them at night. They stay active keeping the rock work clean and can be a great addition to any reef tank. However, in a small tank, you may only want to have one how they can be territorial.

Mad Hatter does not agree with this choice how they are incredibly territorial, and his past experiences Mad Hatter had a 30-gallon tank with a Cleaner Shrimp and a Coral Bandit Shrimp, and they did not get along due to the Bandit Shrimp being so territorial. If it was alone in the tank that would be fine but any other species that gets close to it, it will run off and possibly stress out the other species.

The Sexy Shrimp is a tiny shrimp around 1" in size when fully grown. Most local fish stores will keep them in a container in the tank to make it easier to find when someone wants to buy them. So in a Pico Reef tank, this would be a great invertebrate addition.

The nice thing about Duncan corals is that they are a bit forgiving with their water parameters. In a Pico tank due to the low water volume, your parameters can swing quickly so having hardy corals is a must.

The Blasto Musa coral can come in several different colors and are quite hardy corals. While an LPS coral they have been known to drop their polyp from their skeleton and produce a new colony where ever it lands, this is something rare to see in LPS corals. They tend to grow into a pineapple shape and due to their polyps can give the appearance of a pineapple.

Acan corals can be hardy corals if it has the correct water parameters and placed in the right spot. They come in several different colors, and they can interact with food.

While the Candy Cane coral does not come in several different color varieties, they are hardy, pleasant to look at and can grow quickly. They will also interact with food.

Zoanthids also come in many corals and in the right condition spread into a beautiful Zoa garden, they come in a wide range of prices depending on what you like. When dealing with any type of polyps you want to take into consideration polytoxins and treat them responsibly, wear protective eyewear and gloves when dealing with them and always wash your hands even when wearing gloves. Ploytoxins can affect any living creature from people and pets.

That is Coral Magazines Top 10 list, provided by Mad Hatter. What do you think of this list? Would you add anything or change the list in any way?