All you need to know about Scissortail Goby!! 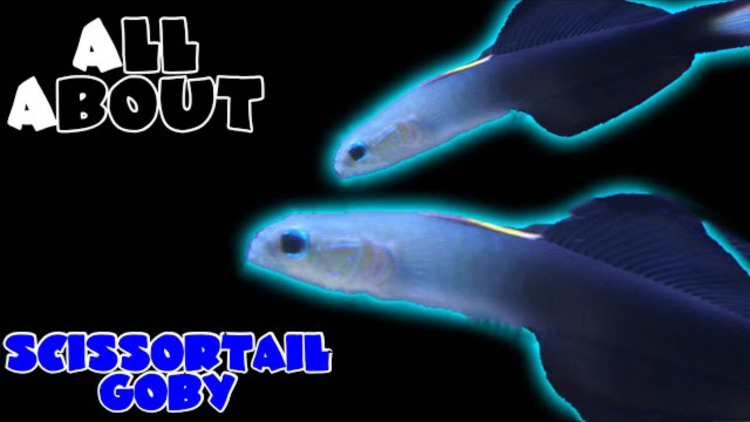 Suppose you are looking for a fish that is different and eye-catching and will not cause issues in a reef tank, look no further. Scissortail Dartfish has a light blue body near their head and fades to a dark, intense, almost black midnight blue towards their tail. In a large tank, keep several of them will help show off their unique tail-fins.

In the wild, the Scissortail Dartfish can be found around Africa and through different parts of Indonesia.

People also put the Scissortail Dartfisf in a smaller reef tank, but we suggest that they should be kept in a 30-gallon tank or larger. They are commonly found in nano-reef tanks. If frightened, the Scissortail Dartfish can burrow into sand sub straight their for it is suggested that you have a sand sub straight in your tank, but it is not required. If your sub straight is something like crushed coral, they are likely to damage themself if frightened, and they attempt to burrow into it.

Just like Gobies and other Dartfish, it is highly suggested that your tank has a lid because the Scissortail Dartfish is a jumper, when frightened (even if you have a sandbed) or also while feeding the can jump out of the tank if the opportunity is presented. Unfortunately, they tend to jump when no one is around.

The Scissortail Dartfish are super easy to care for. They are a great beginner fish to can get. They are beginner fish because they are easy to get to eat when you first get them. They are very hardy, easy to take care of, and they are also disease resistant, so you don't have to worry about it. One of the best things about them is that they get along with most of the fishes.

The temperament of the Scissortail Dartfish is very peaceful. They do great with other peaceful fish and are not an aggressive tankmate.

Water Parameters for the Scissortail Dartfish

The Scissortail Dartfish is a carnivore. While they do need a high protein diet, the nice thing is that they will pretty much eat anything, so it shouldn't be hard to get them to eat. If you want to see them go crazy, feed them frozen mysis shrimp cubes. They love them.

They are hardy eaters who will also eat flakes or pellets foods with no problems. At first, they can be shy, especially if there are other more aggressive fish in the tank. So instead of feeding flakes that may not get down to them, you may want to feed pellets so that they can sink to them and make it easier for them to eat.

Scissortail Dartfish can be kept in a group and with other Dartfish and Gobbies. Keep in mind while they are small, keeping a small group of them is great, but as they start to get bigger if the tank is not large enough, they will begin to get territorial. As they get older, they will no longer stay in small schools and will eventually split up into groups of two most likely.

Scissortail Dartfish does well with other Dartfish like Normal Firefish or the Purple Firefish, which are two common Dartfish found in most Local Fish Store. Ideally, you want to put all of the Dartfish or Gobies at the same time so that they can all establish territories at the same time. If not, when you add them, some of them will already have territories established in the tank, and they might get aggressive. On the other hand, Diamond Watchmen Gobies, Sand Sifting Gobies, should not be a problem if added later.