Top 10 Cory Catfish for Your Aquarium 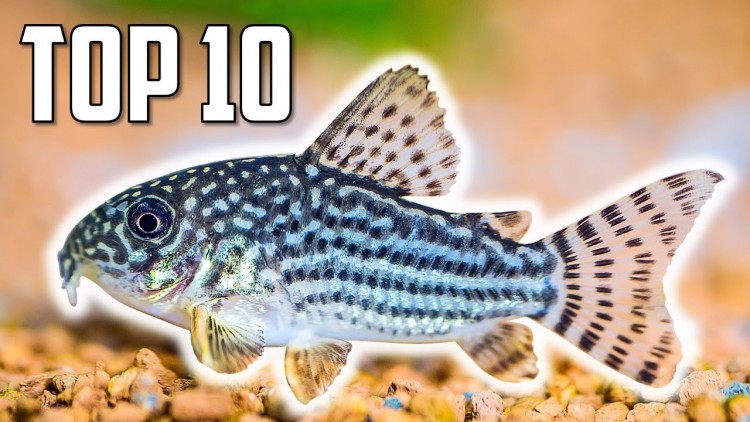 Our discussion on this topic is about corydoras. There are hundreds of types of corydoras in which all have different qualities like the way that they look, the parameters you keep them in, the way they breed and also the price. We will be discussing the top 10 of the best corydoras.

So the first one I've got is the sterbai corydoras and I think is quintessential and what people are drawn to from just sales. With its polka dot pattern, it's orange fins and it's great size makes it a great tank mate. Now, pretty much for all the corydoras that I'm going to talk about, the pH is anywhere from 6.6 to 8, depending on where it was bred, if it's originally wild-caught or captive-bred.

What makes the sterbai corydoras so lovable is the wide parameters which they are so much tolerant with. The sterbai corydoras is a great fish and the only thing you've got to worry about is getting them some food because you might have all these cool fish up top and they're eating all the snacks you're putting there. All you have to do is make sure you're getting some wafers down there, some frozen bloodworms. They really love worms and that's why they have the whiskers or the barbels to enable them to navigate to the gravel or the sand and find the little tasty morsels. So all you have to do is actually feed them and don't let them get skinny.

The second corydoras is pygmaeus. Now, if you've got a nano tank that you feel needs some bottom dwellers, I highly recommend the pygmaeus corydoras. They have a stripe on their body and they only get about an inch or so and you can breed them in a little colony. If you have no snails, tetras, and shrimp, and it's just them or anything with a really dense planet tank, you can find a baby or two, which is super fun, but then you can put them with other nano fish also and they are very cool. Not to be confused with habrosus corydaras and other nano fish or a nano corydoras, they get a little bit bigger and they're a little more polka-dotty. But in general, this fish is going to cost you like $5 or less, which is nice and get yourself a group of six or more. And that really goes for any of the corydoras. If you have more, the better they're going to do. You would think if you have five of them, and you've watched them for a year, you know them, then get 50 of them and you'd be like, it's like I've never kept them before because they really act differently the more they get.

With corydoras you can't just go well, I'm going to get one of each of these on the list, instead, you need to get a group of six from similar species because they don't really commingle. However, they won't get that extra behavior out of that commingling. It's not that they'll attack each other and it's not that they're going to feel necessarily unsafe but you won't get that extra benefit.

The next one is the scleromystax barbatus corydoras (also known as the Banded corydoras) and what makes it so special is the gold undertone on the males, but also they are a cool water corydoras. They can go down to 67, 68 degrees, which is cool when you have an unheated aquarium. These corydoras get about three, three and a half inches, they are like leaf litter, they breed at a little bit lower pH. The fish is very fun but expensive. It's not uncommon to see them go for about $30 a piece which is too much when you're buying six of them, but if you have some success with them where you go and have a lot of babies and have excess, they also get you some money back out of your local pet store or your local hobbyist. If you're up in your corydoras game it's a great one to really go with.

Next up would be the orange laser corydoras and their name's origin is from the orange stripe on them. Just like most of the corydoras, the orange laser corydoras is easy to keep and nothing really particular about their care requirements, just that they cost a lot of money, they're fun to breed and they look good. Just spoil them with frozen worms and real meaty foods and lots of covers. After that collect eggs. That's one way to harvest them or if you got enough cover, you'll just find more babies and that's the lazy way that you'd like to go with. Because there are corydoras that sell anywhere from $15 to $30, everyone's excited when they get five little babies and they get to grow them up or six babies or whatever it is.

Next up we've got the panda corydoras. I would say it's the most famous, second famous or very popular and they don't get as big which is why I think they're popular. They also have that panda look to them of the black and the grey or fleshy color to them. They work well in the 10-gallon tank. The panda corydoras are one of the better ones for smaller tanks, but more space is always better for every animal. If you can get a bigger tank go and do that. But yes, we do recommend six more of these. The panda corydoras are more at $5 level. So you're looking at about 30 bucks for a group but they'll be long-live for you as long as you get that food to them you shouldn't have too many problems.

Next up we've got, and the cheapest one is the albino corydoras. The albino corydoras is an aeneus cory that is the albino version. For whatever reason, they are very prolific. When they have babies it's 300 plus at a time, and so you can pick them up on the cheap for maybe as cheap as $2.50 to $5. I think that'd be pretty high on the scale of corydoras for the albinos there, but because they're in PetSmart and Petco and they're everywhere, they're one of the few corydoras that people actually start with. Too often you see them as onesies and twosies. The most common way people buy fish is in pairs. They want everyone to have a buddy because they want them all to be happy. So, the albino corydoras actually do better in a group. So, if you're in for it, go ahead and start off with five or six of them and don't be afraid to get eight or nine of them honestly if you have a 29-gallon tank.

Once they fully get grown and they're two and a half or maybe up to three inches and those females are nice and fat and full of eggs for you. I think you'll really enjoy them. If you don't like the albino version, they do make a bronze version as well. Some people are freaked out by that albino.

Next up we've got the Julii Corydoras. This cory has a good looking striated pattern and they do well in a group of six. They go a little bit cooler water down around 70-degree mark and they're nice for some of the tanks with hillstream loaches or dojo loaches or something else you've got going on there. Basically you shop by the look.

The next one is similis corydoras. What I like about this is sometimes you call them the violet corydoras, they've got a spot on the tail. They've got a lot of those spots on them. Around that spot, as they get bigger it seems like a purple color which you normally don't see purple in the aquarium. They don't get huge either but they're a little expensive. They can be on the upwards of $10 side, maybe even $12 side. But they're a deluxe panda cory. They have the same size roughly, they've got very similar behavior but different patterning. They're mostly captive-bred, so not too many wild-caught come in however they're not that hard to get ahold of. They're just not common and are not found in a lot of pet stores, which I'd say one out of 10 stores actually are going to carry because too often people won't buy a group of six fish that cost $10 each because that's $60 when you can buy those ones and they're only $4 which is only $24. It usually takes more advanced pet stores to really carry some of these corydoras.

Next is the brochis multiradiatus (also known as Hognosed Brochis), which technically is not a corydoras, but most people swear it is a corydoras. It's like a jumbo-sized corydoras, they get three and a half, four inches, chunky monkeys for sure. And why would we use those? Well, we might use them with some bigger cichlids like blood parrots and Angelfish and earth eaters. It's not like its that aggressive, but there might be a concern where that might fit in its mouth and you don't want it to eat it accidentally. Actually a good pairing with them is the goldfish because they're big and docile. The biggest problem with them though, is they range from $25 to $30. So when you're buying six it's a big investment and they're not that easy to breed, but I think they are beautiful, and they really add something that it's pretty hard to add in those communities that have these larger fish.

The last one is salt and pepper corydoras. Now, depending on your locale, that could mean the habrosus corydoras that we already talked about earlier or it could mean paleatus cory. That's what I'm talking about right now, but these common names of salt and pepper cory, anything that's got black and white spots on it or black and grey spots, salt and pepper helps it sell better because no one remembers paleatus cory, they remember salt and pepper. What is nice about them is that they can go cooler on water, down to about 68, they get about three inches, they cost around $4, so they're on the cheaper range corydoras and they're great entry-level, beginner corydoras to get your tank started and they've got a nice pattern to boot and not hard to breed. They've got all those things wrapped up into one and they really are a good beginner corydoras. Now, why would we have beginner corydoras? Well, some of them are really expensive but I think everyone at some point in their career ends up keeping corydoras and most people you talk to will be like, no corydoras are great. It's like tetras. Not many people hate tetras because it's like, well, there's so many of them and they're pretty much messy with everything. The same thing with corydoras, they mess with everything.