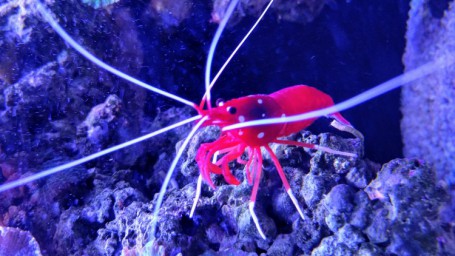 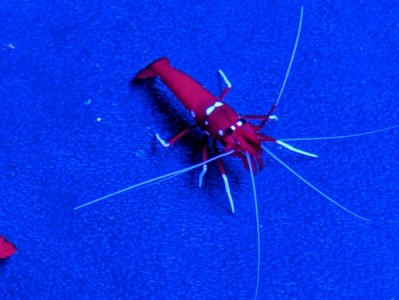 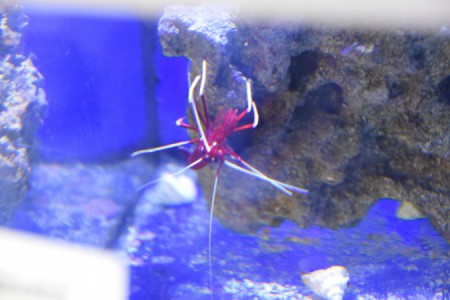 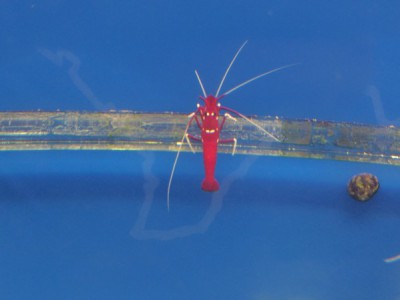 The Blood Red Fire Shrimp is one of the most popular shrimp in the aquarium hobby. It has a blood-red body with white spots and long white antennae. Depending on which region of the Indo-Pacific from which it originates, it may have the white dots just on its carapace or covering its entire body. The Blood Red Fire Shrimp prefers a habitat providing it with a cave or overhang where the lighting is not too intense. While it will tolerate its mate, others of its own kind will be chased away or harassed. It is generally peaceful with most other organisms in the reef system unless they impinge on its territory. It will reach 2.5 inches in maturity.

The Blood Red Fire Shrimp is also considered to be a cleaner shrimp species. It sets up a ‘cleaning station’ in your tank–a part of the shrimp’s territory where fish will swim up and receive a complimentary cleaning service–which means the shrimp will pick off dead scales, skin and remove parasites from the fish. The Blood Red Fire Shrimp is also an excellent scavenger and will move along the reef or substrate bottom looking for any meaty foods. Often, only its antennae will be visible.

The minimum tank size should be 30-gallon. They should only be added to mature tanks containing plenty of live rock so that shelter can be sought during the day; however, during the evening they can usually be observed going about their business under blue moonlighting. Fire Shrimp are sensitive to nitrites and ammonia in water, so the tank should be fully cycled before introducing them and you will want to have some experience managing a saltwater tank and keeping nitrate levels down. Copper should be avoided at all costs, so remove the shrimps if any of your fish need to be treated with copper-based medicine. Copper is used for killing parasitic invertebrates, like saltwater ich, but it will also kill your shrimp.

Also, the fire shrimp will molt periodically, shedding their exoskeleton to form a new one. The old skeleton will be seen floating around the tank and may cause some to panic thinking their shrimp has passed on to shrimp heaven. Don't worry, they have just molted. Remove the old skeleton from the tank and discard. It can be used for iodine supplements that are needed for them to grow new skeleton. However, be cautious not to dose iodine unless you have a test kit. If you are getting low iodine readings on your test kit, then dose.

The fire shrimp has been reported to prey on both large polyp stony (LPS) and small polyp stony (SPS) coral polyps. They are rather reclusive when the tank lights are on but come night time they may be out and about crawling all over the tank nibbling on your prized corals. So, just keep this in mind if you have a reef tank setup full of expensive corals, they may be doing some damage to the corals.

With the gigantic exception for the fish that will prey on and eat the Fire Shrimp, it is otherwise compatible with most other community reef fish and is probably advantageous if you are keeping fish that are notoriously susceptible to parasites, like the blue hippo tang.

Like most of the animals we keep in the saltwater aquarium hobby, there can be aggression between blood red fire shrimp or even other cleaner shrimp, like the skunk cleaner shrimp. A little shrimp-on-shrimp aggression can be expected, so it is probably best to keep one per tank.

They are a cleaner shrimp species and will eat parasites and dead skin off your fish. They are scavengers and will eat any leftover meaty foods that settle on the reef or aquarium bottom, including thawed frozen foods, flakes and pellets in the tank. If you have an ultra clean SPS tank(low bioload, low feedings), you may want to target feed your shrimp–but otherwise, they are likely to be alright as long as your tank is sufficiently fed. You will want to monitor to make sure they are eating well and aren’t always bullied out of eating.

Depending on the particular aquarium the amount of supplemental food necessary will vary, when feeding the fish it is best to keep an eye on the Blood Red Fire Shrimp to gauge how much leftovers it is receiving.

They are hermaphrodites, meaning they have both male and female reproductive organs.

Fire Shrimp regularly fill with eggs in the home aquarium, but raising the larvae is extremely challenging - mainly due to predation by tankmates, strong currents sucking them into the filtration system, and difficulty in feeding them with appropriately sized foodstuffs such as phytoplankton.

As with most all marine invertebrates, this species is very intolerant of copper or high levels of nitrates in the aquarium. It is important to provide proper levels of iodine in the water to promote proper molting, which is imperative as this species grows. 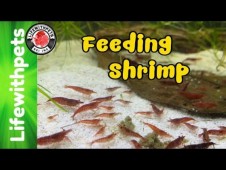 How to feed your freshw.... 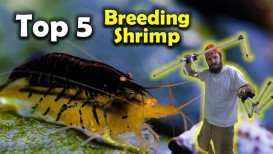 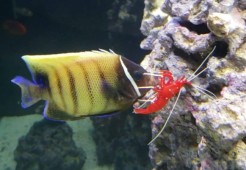