Top 5 Must Have Items for Battling Dinoflagellates 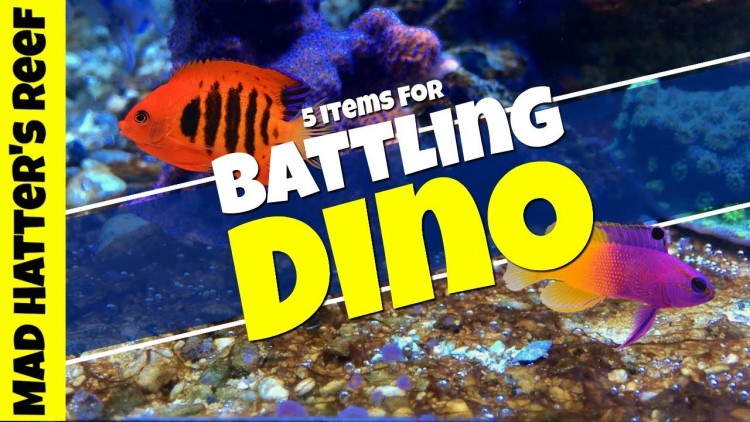 We're going to be taking a look at the top 5 must-have for battling dinos. If you've never dealt with dino, it can be a nasty little bugger that can lead to hobbyists shutting down a reef tank if not dealt with properly. As far as the first step to dealing with dino, you first have to identify it properly. Dino has a very brown appearance, and can often start off your day where it's not looking so bad but as the lights are on and it is photosynthetic, it will use the lighting to build up and create this brown snotty looking color on the surface of your substrate, your rocks, and even sometimes corals. Usually, you will see little air bubbles that are trapped inside the snotty looking brown stuff. Ultimately, there are some things that you can do to overcome it. So, let's jump into the five must-have items for battling dino starting with:

Air pumps can do a tremendous job in increasing the oxygen levels within your reef tank and that is actually one of the main frontrunners to allowing dino to overtake a tank. A reef aquarium that has low levels of oxygen is going to allow dinos to overtake the tank. Using an air pump, airline tubing and a wood diffuser are going to do a lot to add oxygen to your reef aquarium. Now these products themselves are not enough to battle dino. They're not going to remove it from your aquarium but it does help with a lot of the symptoms that come from treating dino. A lot of the different medications that are out there for treating dino deplete oxygen levels even more in an aquarium, which can ultimately supercharge your dino. So, I prefer using an air pump, airline tubing, and wood diffuser because they put out micro bubbles which is incredibly small and moves a lot more water and is much more productive by creating a surface agitation helping dissolve oxygen enter into the aquarium and getting your oxygen levels up.

Now be careful with this because a lot of folks when they start seeing dino develop in their reef tank, they want to do a water change. Now even though that we're talking about this being one of the five must-have items for battling dino, you do not want to do a water change. Now the reason that this product is on the top five must-have items is that there's something that you can do to remove dino from your aquarium and do it in a way that you're not putting or needing to put new saltwater in your reef tank to actually effectively remove these nasty little snot buggers from your reef tank. All you need to do is put a filter sock in your sump and then take the other end of your siphon put it into the filter sock and then you can continuously siphon all of the substrates in your reef tank and then eventually remove the filter sock and throw it out because you don't want to put it back in anything that you are using. Also, you're going to properly clean it with some type of chemical, but ultimately with the use of a siphon and filter socks you can actually siphon the gravel or substrate in your reef tank and remove as much of that dino as you physically can, and that is going to help reduce a lot of the dino in your reef tank and make it look a little bit better for the moment but it's not a cure just yet.

The reason that a protein skimmer is an important item for battling dino is because of what it actually does in your reef tank. It's going to do a couple of different things for you by adding bubbles to the water which is going to help increase your oxygen levels in your reef tank which is what we discussed at number five. A protein skimmer is also an incredibly important component of a successful filtration system on a reef tank and also helps to reduce a lot of the maintenance associated with keeping a reef tank.

Products like Dr. Tim's Waste-Away. Now there is a regimen that you need to follow with this product which involves a lot of different steps and you have to be very disciplined and follow that process to a tee. But the benefit of using a bacteria is you're not adding anything foreign to your aquarium. It is 100% reef safe and is going to make sure that your fish are safe, your inverts, corals and everything else is safe. What it does is it goes up against the dino in a way that is competing. When the bacteria win, as long as you give it the opportunity that it needs to be successful, it will effectively have the dino in a stronghold and outcompete it and eventually take over the tank. It also does a lot of other benefits as well. A product like Waste-Away, or the Waste-Away gels, which in this case you just set up and forget therefore saving you time and you don't really have to get in there every day. But both of these products are extremely effective at battling dino. Now in the event that you have a bacteria bloom, your water can actually become cloudy. Now that is merely that there is too many nutrients in the water in which the bacteria had an explosion to the point where you can actually see it. A protein skimmer can also help remove the dead bacteria and all that excess out of your tank and that's why that is such an important piece of equipment during the process of removing dino from your aquarium. You don't actually remove dino from your aquarium but essentially keeping it at bay. There's always an element of dino in your reef tank and essentially when you have a dino bloom is because there are certain elements within your system that are out of whack.

Using any of the five items discussed in this article is going to help keep dino in check and keeping your reef tank looking absolutely beautiful.