Now and then, you need to take a little bit of punt on a fish that may or may not get on with your corals or cleanup crew in order to get a real showpiece fish. That's all this article is all about. 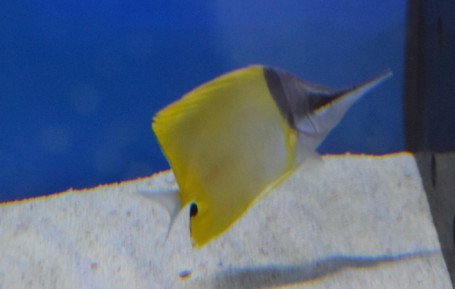 Butterflyfish are some of the most striking fishes in the hobby, and these guys are one of the prettiest variants. They are unlikely to bother any of your cleanup crew, and they are not a bad chap with corals.

As with every fish on this list, there is a fair chance they might take a liking to something in your tank, and with these guys, it is most likely to be fleshy LPS corals like Brain corals.

They give a similar look to the Copperbanded Butterfly but are easier to keep than their ginger cousins. As a more reef same alternative, you could try a pyramid Butterflyfish which is about as reef-safe as Butterflyfish comes, but if you have got the Cojonies, the Yellow Longnose is the real deal.

The Harlequin Tuskfish is illegal in many US states, and it blinks sideways. This is a massively underrated fish. They won't touch your corals. They are jaw-droppingly stunning, and your friends will be drawn to them the second they see your tank now, while they are coral safe. Unfortunately, they are not necessarily inverted safely.

They are members of the Brass family and have fairly sizeable teeth, all of which means crabs, shrimps, snails, adn brittle stars are all potential meal candidates.

Many reefers report they leave cleanup crew along, but from personal experience, some specimens will certainly clear the shrimp.

So, if you want to take the risk with one of these, you should do in the knowledge that some of your investments may perish. But it is an absolute beauty, and this fish epitomizes it.

As reef keepers, we all aspire to have a sensational tank, and a reef tank with a centerpiece fish or two is a truly spectacular sight. 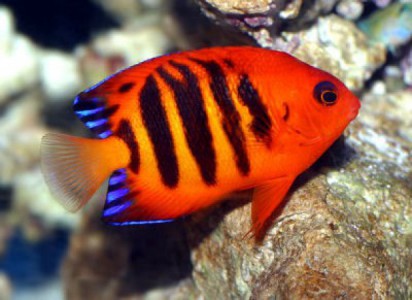 The Flame Angel is one of the most iconic fish in the hobby. It has a bright red and orange body with zebra stripes leading to an electric blue tail. As a dwarf angle, it is suitable for a smaller tank of around 70-gallons.

Although, it will probably be fine in an even smaller tank for at least a year or two. The good news is that it won't eat your cleanup crew, but the bad news is they are known to nip at stony and soft coral polyps.

Anecdotally it is one of the most reef-safe dwarf angels, and you can get about a 50-50 chance with these guys. The right specimen can be a model citizen, but you are unlucky enough for the coin to come up tails. There's every chance that they will start dying on your corals, particularly fleshy LPS like Acans.

If you are not brave enough to go for Flame Angles, the coral beauty is a great alternative from the dwarf angel family. By reputation, these guys are the most reef-safe dwarf angel, and they still look pretty cool, just not a patch on our main event.

If you see corals retracting or even showing bite marks after introducing a Flame angel or any fish on this list, you can always make a simple fish trap and remove the little scamp out of a coke bottle.

Now, sometimes that is easier said than done, and if you are unlucky, you might get a fish that goes rouge and eats all your corals before you have the opportunity to catch it. So, if you do decide to go for reef safe with caution fish, go with your eyes open and be prepared to act fast if the worst happens.