Thinking About Getting a Tang Fish? Here is What You Need to Know. 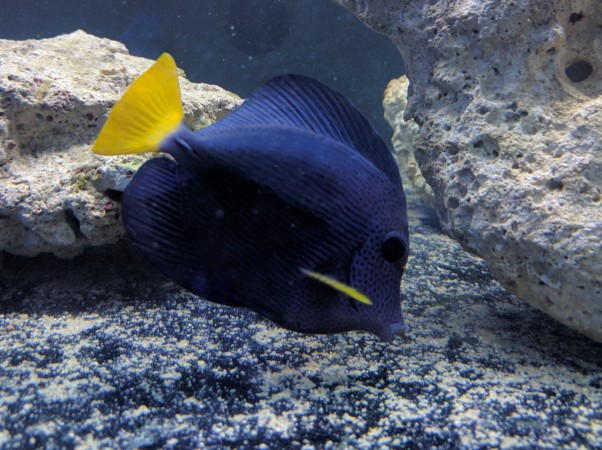 The Tang fish is a popular fish in the hobby. It is easy to see why too, they are very active, and many species have a bright, unique set of colors. They swim throughout the entire aquarium. There are over 75 individual species currently discovered in the ocean today. They have a thin, tall profile. When you first look at a Tang fish, it doesn't look like a fish that you should worry much about. Tang aggression doesn't look so bad. It just seems like the Tang just pushes the other fish around with their body.

Tang fish are also known as Surgeonfish, "they have a very particular set of skills, skills that they have acquired over a very long career. Skills that make me a nightmare for other fish" the reason they are known as Surgeonfish is due to the scalpel-like spine blade that they have on the base of their tail. So in true Bon Qui Qui style, the Tang will look into your eyes, and you can only imagine them saying, "I will cut you". Tang's push their body into the object/fish, then they swipe their tale cutting them. This sharp scalpel-like spine is why Tang's are also known as Surgeonfish. They use this weapon on fish that they want to intimidate or that try to intimidate them, fish showing aggression to them or anything that they feel like could be a treat to them, including people.

All Tang fish are aggressive; each of them have their own personality and background. Even if you find a Tang that is not aggressive with time, they likely to start to show some signs of aggression, I guess it's important to talk about why Tang (Surgeonfish) are so aggressive to start with. As mentioned before, Tangs are a very active fish; some are even known to travel miles in a day while in the ocean. All this activity comes at a price, Tang's graze none stop on the live rock and will pick at the surrounding algae. Even in the ocean, Tang's do not like competition. When it comes to food, they mean business. If a Tang declares an area home, it will drive away any competition from the area (including other Tangs).

Put yourself in the Tangs fins, imagine you are stuck in your home and can't leave, and every day you get two sandwiches, one in the morning and one in the afternoon. You wake up, and now you have another person in the home, your like, great, company. But when the sandwiches come, you still only got two sandwiches, one breakfast and one in the afternoon. You have to share. What happens if a third person is added to the house, and you still get the same amount of food or four or more people. This is how a Tang feels only in their case, the rocks are their sandwiches, how that is where the algae that they graze off of grows.

Each time the Tang encounters an Herbivore or an Obnivors, all it sees is someone to compete with for food.

Now imagine a very active fish that is used to traveling the ocean, who is always hungry, and it's now stuck in your tank. This is one reason why it's important to have long tanks when considering a Tang. This is why it is recommended to have at least a 6-foot long tank, and some species of Tangs need much larger tanks. Some species of Tangs grow to be over two feet long, such as the Vlamingii Tang, and require at least a 350-gallon tank. Clown Tang's max size is about half the size of the Vlamingii, yet they still require at least a 250-gallon tank. Keep in mind, these are all minimum tank sizes, and they should be as long as possible, giving them the opportunity to swim longer stretches of water at a time.

This is why people (Tang Police) tend to freak out when someone wants to put a Tang in their 30-gallon biocube, it has nothing to do with you, and how perfect your tank conditions are, it has to do with the requirements of the fish, you will find that the more active a fish is the more space it needs. Some people may think no problem I will get a baby Tang that is about 1" long and will rehome it once it gets bigger. If feed properly and kept in ideal water conditions, Tang's can more then double in size in less then a year and quickly gets to 5-6" long.

My son was a little over a year old when Dorry (my Blue Hippo Tang), for some reason, decided to jump out of my tank. I was in my office, my wife was in the kitchen, and my son was in the living room when it happened. Seeing the fish flopping on the ground, my son wanted to help and get it back in the tank. When he got close to it, it flopped and landed on his foot and sliced his toes. He screamed, my wife and I rushed to the living room, my wife races to my son, seeing he was being attended to I focused on the flopping Tang that was on the ground. I did not realize it until after I got the Tang back in the tank that my son's toes were bleeding. We asked what happened and he explained it and said that the fish hurt him when he was trying to help him. My son is now six years old, and every time he sees a Hippo Tang, he tells everyone about that day, and then he ends the story with Dorry is a mean fish.

Sorry, squirrel… where was I?

Yes, so make sure to watch out if you place your hands in your tank and own a Tang. If you have an aggressive Tang, do not underestimate their ability to cause damage. There are many people who have been cut by a Tang, and while I am not one of them, the pictures I have seen all look bad.

Tips that could help keep a Tang's aggression down.

Getting your tangs to eat Seaweed/Nori strips

While in most cases, when you clip nori into your tank, the Tangs will go nuts and eat it up. In some cases, they don't go after it. If this happens, here are s few things you can try to get them to eat it. Place the nori underwater for a little while to hydrate and soften in the tank water, then rub a piece of the nori between two of your fingers while underwater to allow small particles of nori float around. I have never seen this not work. They start to eat the flakes of nori floating around and quickly realize what's on the clip.

Sometimes the Tangs are afraid of the clip. You can also grab some nori and attach it to a small rock with a rubber band. Tangs naturally graze on the rock, so eventually, when they get to the rock, they should start to eat the nori that is attached to the rock.

How quickly do Tangs grow?

Every Tang's growth rate will vary just like humans, but it seems like it is common for Tangs to grow to 5-6" long quickly, and after that, they tend to grow slower. In a year or less time, if well feed and optimal water conditions, a Tang can double in size in a year or less.

In the ocean, some species of Tang fish live for 30 years, in an aquarium, the average lifespan seems to be around 8-12 years.

How do you choose a Tang

The type of Tang you choose will be a mix of preference and the available home that you have for it. At a minimum, a 6-foot long tank is required, but some Tangs require much larger tanks, so do some research before you buy one. They grow quickly, so even if you choose a small baby, it could quickly outgrow a small tank.

Ask your local fish store (LFS) to feed the Tang while you are there and see if it eats. Only buy a Tang if it is eating, make sure to note the type of food that it ate at your LFS. If your LFS is far away, it may be wise to buy some of the same food if you do not already own some to prevent having to come back to get some if it refuses to eat when you get it home. Look at the Tang's stomach area and note if it is sunk in or if it looks like its plump belly. A sunken belly could be signs of malnutrition.

If the Tang has signs of Ich/White Spots I would stay away from it, while it's treatable, you don't know how long the Tang has been infected and how stressed out it is. If it has been dealing with ich for an extended period of time, it could die while you are treating it. Ideally, you rather buy a healthy species only.

Tangs are typically found near reefs with high flow rates. While the high flow is not required in your tank, it is ideal to provide high flow areas in the tank.

Juvenile to Adult Changes in Tangs

It's important to research tangs before you buy them, to make sure that they are being put in a tank ideal for their species, but also because some Tangs can change as they get older. That's right; you might fall in love with that 1" long fish only to find out that the adult version of the Tang may look completely different. Some species of Tangs go through a drastic color transformation as they get older. For instance, a juvenile orange shoulder tang is yellow, and as it becomes an adult turns aqua blue color.

Ich/White Spot - Treatable, while in most cases not deadly, but the Tang could get stressed out to the point of death. There are many different ways to treat ich on fish from freshwater dips, tank transfer method to chemically.

Marine velvet - Treatable if you act fast, this is a disease that can quickly wipe out all of your fish in just a few days. Cooper treatments have been seen to be successful treatments. The key is to take out any fish who you think are infected. Cooper is toxic to most coral and most invertebrates.

Black spot/Black Ich - Treatable, not deadly but can spread to other fish even though more commonly found on Tangs. A few freshwater dips will normally get rid of them, there are some chemical treatments as well that can be used, but they are toxic to corals and invertebrates.