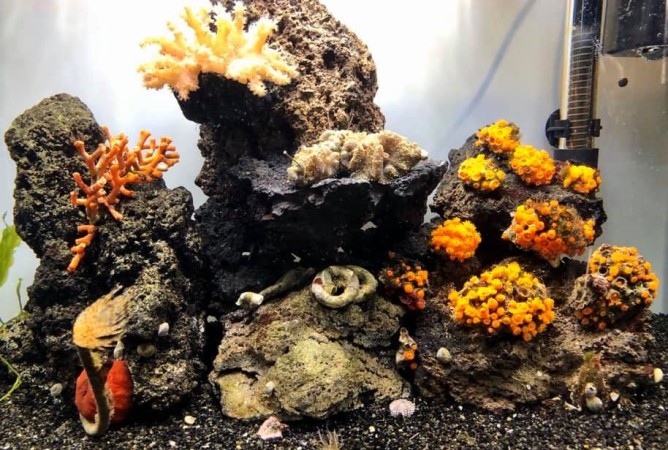 With so many kinds of invertebrates, I have a tough time singling out just ten that aren’t for the average saltwater aquarium. In fact, thousands of them aren’t suitable, but in this chapter, I list ten that you may encounter at your aquarium dealer.

Octopuses
These critters are incredible attractive cephalopods and every aquarist I know is intrigued by them. Unfortunately, most octopuses are large, crafty, and predatory in the tank. They’re also quite delicate, rarely living very long in captivity. Why waste the money?

Crown of Thorns Starfish
This species of starfish isn’t a friendly invertebrate. Instead, it’s a predator on the reefs, eating corals left and right. If you plan to have a reef tank, avoid these funky-looking starfish.

Bristle worms
These polychaeta worms are rarely purchased, but they usually end up in your aquarium hitchhiking on live rocks. They’re named after the bristles that line their sides. These bristles are sharp and can easily irritate you if you handle them.
Although small bristle worms are relatively harmless and can be helpful tank cleaners, larger ones can damage corals and must be removed.

Mantis Shrimp
Mantis shrimps are nasty, ill-tempered crustaceans capable of inflicting a serious injury with their powerful, spear-like arms. They’re efficient predators of other invertebrates and fishes. This is one shrimp that doesn’t act like one.

jellyfish
Jellyfish aren’t the most common aquarium invertebrates for a number of reasons.
Although public aquaria do display jellyfish, they go through a lot of work to do so. Jellyfish require far too much work for the average aquarist in terms of water quality, aquarium conditions, and food. If someone offers you jellyfish, just say no.

Queen Conch
The shell of this large gastropod is probably the most popular curio in the tropics.
The beauty of this animal and its shell often entices the new aquarists to add a small one to their aquarium. Don’t do it! These snails get large. If you want a queen conch, collect a shell.

Lobsters
If you place a lobster in your aquarium in the evening, by morningyou’ll no longer recognize your aquarium. These feisty decapod crustaceans are disruptive and territorial, not to mention cannibalistic. Do yourself a favor; don’t add a lobster to your peaceful community aquarium.

Bivalves
Clams, scallops, mussels, and oysters belong in this group. There are all different kinds of bivalves, and many of them are beautiful additions to the aquarium. I include them here because they’re strictly filter feeders, which makes them difficult for a beginner to accommodate. Practice aquarium upkeep before you add these challenging species with special feeding requirements.

Sea Cucumbers
Although some species of sea cucumbers are okay for the aquarium, as a beginner, avoid these critters. When some sea cucumbers are stressed, they release toxins into the tank, and you don’t want that.

Fire Coral
Although these cnidarians actually aren’t coral, they’re named after the feeling you get when you touch them. When these animals sting you, you feel as if you’ve been burned. For this reason alone, you don’t need any species of fire coral in your
aquarium