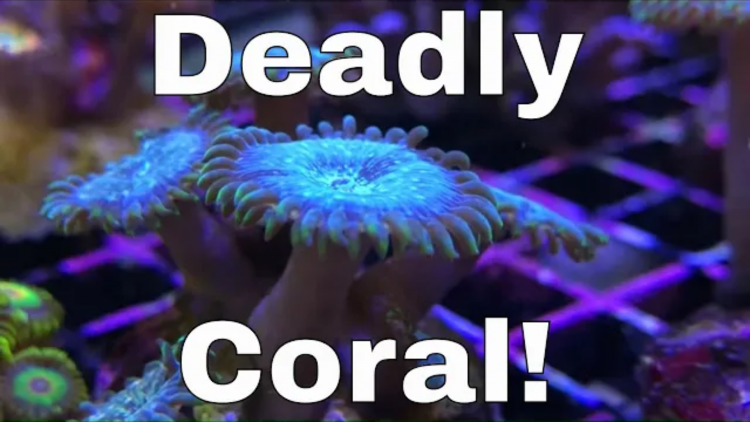 Today we are going to cover a news story that usually pops up once a year; Where a particularly gifted reefer is exposed to something called 'PALYTOXIN,' resulting in a trip to a local hospital. Most of you might have received this article before either by concerned loved ones or a disgruntled neighbor.

The problem with these news articles is that they harm our hobby, and it often plugged with inaccurate information. One of them claimed that xenia was the culprit. We need to clear up several things.

Firstly, palytoxin is no joke, and although any good Local Fish Store (LFS) should explain to you exactly what you are buying. It is, however, our responsibility as the hobbyist to research the animals that we purchase.

It is wise to be cautious when handling either of them. Both of these types of corals are widely considered to be desirable corals for beginners in the hobby. But are also sought after for experienced hobbyists too due to their hardiness, vibrant, diverse coloration, and wide price range.

Like many things, they can also be inadvertently added to an aquarium as a hitchhiker on live rock or even other coral frags.

Are These Corals in Your Tank?

So, are these corals in your tank, and are they a ticking time bomb just waiting to go off? Not really!

When handled correctly, they are relatively safe. Don't get it wrong; there is no recorded death from palytoxin. However, if you received a high enough dose, it could be lethal. But, so can a dog, knife, or frisbee; when placed in the wrong hands.

How Can You Protect Yourself?

So, how can you protect yourself? As long as you follow these four basic rules, you should not have any issues with Palytoxins.

Fortunately, when on surfaces, the toxins can easily be deactivated using simple household bleach. So, if for some reason, if you decide to use your food container to dip your corals. Stops being so tight ass and go and buy yourself some coral specific container and clean all the containers you have used with bleach to make sure they are safe again.

Also, just to be clear, please don't drink bleach even if you feel like you were exposed to Palytoxins. It does not work like that. Bleach is toxic.

Most Common Ways to Encounter Palytoxins?

So, if it is so easy to stay safe, why do we hear of people and families being affected by Palytoxins. Problems usually occur when the reefer/hobbyist does something wrong. There are two ways in which people typically get exposed to the toxin.

Each of these essentially will vaporize the toxin. Once it is vaporized, it can travel a considerable distance causing issues, not just with the person working with the coral but everyone within the immediate proximity.

What to do if You're Exposed to Palytoxins?

You probably should head to your local hospital now, rather than watching YouTube videos. Although there is no cure for palytoxin, it is best to be monitored, and they should be able to treat the symptoms as your body deals with the toxin on its own.

What are some of the main symptoms for Palytoxins:

However, there are other symptoms like runny nose, caught, sore throat, and headaches, which is relatively common for a whole number of illnesses.

We can still enjoy these corals, provided we respect them. Therefore, the next time you get the urge to lick the everlasting Gobstopper Pollock to see if it does taste like a gobstopper. You might want to reconsider it.