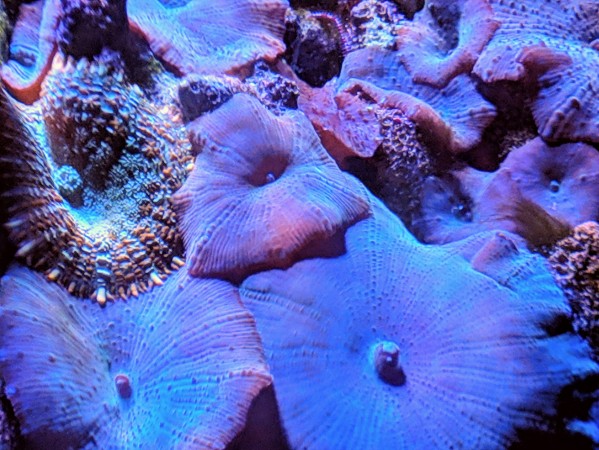 Mushroom corals are also referred to as False Coral, Coral Anemone, Mushroom Anemone, Disc Anemone or just Mushrooms. Mushroom corals are a great beginner coral due to their ability to tolerate a broad range of water parameters. A sudden swing in water parameters, light intensity and flow will not affect mushrooms allowing for just about anyone to be able to keep them. Most mushroom corals like indirect light. This is nice, allowing you to add color in areas of your aquarium where other corals have a harder time surviving. They are considered a soft coral because they do not have any skeleton structure. They do best in an environment with live rock or some other solid material they can attach to.

They are sometimes referred to as Mushroom Anemones due to their ability to protect themselves from other corals. Just like an anemone, mushrooms can sting other corals through the edges of its cap. Mushrooms will sting surrounding corals, so be careful where you place them and they can also move to reach better lights.

Mushrooms are popular in the hobby because they come in so many varieties. Different colors and patterns including polka dotted, striped, blotchy and solid colors. Some species disk come in a variety of textures from smooth, bumpy or even hairy/fuzzy.  Some mushrooms colors are just mind-blowing or seem photoshopped even when you are looking at them in real life. The different mushroom species can vary in sizes from 1-inch diameter to 1-foot diameter with the average mushrooms ranging between 2-3 inch diameter. What makes Mushroom corals so unique is are the variation that they come in how hardy and easy they are to care for.

There are many common mushrooms sold and traded in the hobby for just a few dollars like red mushrooms, blue mushrooms, hairy green mushrooms and yet at the same time there are some mushrooms considered rare and in high demand like Bounce and Jawbreaker Mushrooms which sell for anywhere between $500 and up. When I mean up, as of today one of the most expensive corals sold is a Jawbreaker mushroom for $10,000.

In ideal conditions, mushroom corals will propagate and take over the substrate that they are placed on, and even surrounding rocks but they are also simple to manually frag with great success.

Where Can You Naturally Find Mushroom Corals

Mushroom corals can be found throughout the ocean, more species are found in tropical waters, but they can even be found in colder water as well. They can be seen as individually or even large colonies. More varieties are found in brightly lit shallow waters with less water movement. Some species can also be found in deep shadowy waters.

Should You Dip Mushroom Corals?

Yes, you should dip Mushroom corals, one of the more common pests which can hitchhike on mushrooms are flatworms as well as some undesirable copepods or even predatory nudibranch.

If the light source is too low, your mushrooms disk shape will change into a funnel shape to reach out towards the light. They can even start to lose their coloration after some time. If the mushroom is getting the right amount of light, then they will lay flat and expand their disk as much as possible. This is the sign of a healthy mushroom coral. If your mushrooms are getting too much light it will cause the mushroom to contrast, and the edges can start to bleach and lose their color.

Many hobbyists enjoy adding actinic (increase in the blue spectrum on LEDs) the bluish light can enhance some of the colors on mushrooms or even make them fluorescent.

Mushrooms need some water movement but they do not like strong water flow so try to make sure that your water pumps are not pointing towards the mushrooms. They prefer indirect water flow which is best when it comes to mushrooms.

Don’t stress out when determining where to place your mushroom coral. They are quite forgiving. They do prefer to sit on live rock (or rubble) how they like to attach them self to something, and they have the ability to slowly move if they feel like where they are at or feel like there are better conditions nearby. With that said, the ideal location for corals would be the bottom to the middle of the tank in most cases. Also, Mushroom corals can detach from the live rock they are on and float around your tank until they find a suitable place.

Give the mushroom a few days to acclimate to your tank or the location that you set them in, but mushrooms will show if they are happy and will expand and make their disk larger.

I also like to place my mushrooms in a low light area to force the coral to move to an area with better light. It’s an excellent way to get more mushrooms quickly without manually fragging them.

Mushrooms contain zooxanthellae within the tissue which will provide most of the nutrients that the mushroom needs just from the light source. Nutrients within the water will also feed your mushrooms as they will eat plankton and waste in the water, so there is no need to feed mushrooms. With that said they do benefit from the occasional target feeding or even broadcast feedings of small particulate foods. Mushroom corals have a mouth typically in the center of the disk that protrudes slightly. The full disc is flexible and can be used to help move food to the mouth.

Some of the larger mushroom corals will even take larger meaty foods such as brine shrimp occasionally. If you feed your mushrooms brine shrimp, you should be careful to make sure that your cleaner crew is not stealing the food from your mushrooms. Some crabs and shrimp realize that they can irritate the mushroom to make it spit out the food.

There are some large mushrooms species like Rhodactis and Amplexiduscus that have also been known to eat fish by quickly closing their disk and swallowing them. Usually, a mushroom can’t eat a healthy fish and will only threaten fish unhealthy fish as well as fish that like to sit or host on corals. Some gobbies, dragonets, and clownfish could all become victim to some of these mushrooms especially late at night if the fish tries to sleep on them.

In an aquarium, Mushroom get along with many different types of fish and invertebrates. Some of the larger Mushroom species like the Rhodactis and Amplexidiscus genera have been known to capture and eat fish. Mushroom corals will usually tolerate their own species but some species are more aggressive and can sting other Mushrooms. A colony of mushrooms will tend to compete for the light source.

All Mushroom corals are considered semi-aggressive, due to the edge of their disk having stinging cells that can hurt nearby corals. These stinger cells typically do not bother fish and invertebrates in the tank. Mushroom corals can move slowly and can sting nearby corals, be mindful where you set corals. While they can move, the process is very slow, unlike anemones who can travel from one side of the tank to another within a short period. Sometimes coral placed above mushrooms can fall on top of the mushrooms, and the mushrooms will kill the coral.

Generally speaking, most corals are compatible with mushrooms as long as they keep their distance. Some coral eating/irritating species should be avoided as they can pick or eat mushrooms like peppermint shrimp, urchins, triggerfish, and puffers. Even if the species does not eat the mushroom the constant picking at them will cause them to wither away with time due to the stress.

Keep an eye on mushrooms and how quickly they reproduce as some species can be considered a pest due to their ability to rapidly multiply and take over an aquarium.

Fragging Mushroom corals is a relatively simple process, and they are commonly fragged in captivity.

Water changes of 10% bi-monthly or 20% a month are needed to control nutrient build up. If your mushroom corals are looking sick, it is also a good thing to do a 20% water change. Excessive nutrients, like phosphates and nitrates, can do sever damaging to mushrooms.