How Reef Aquariums Hobbyist Can Help Spawn Corals in their Tank 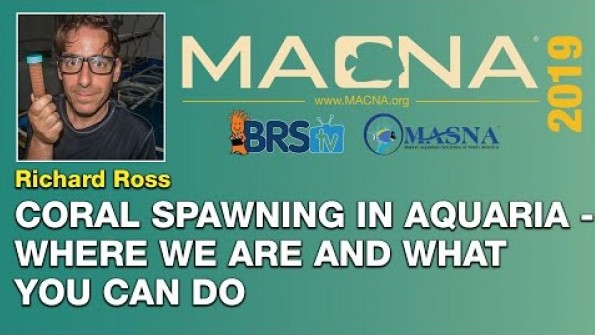 Richard Ross is speaking at MACNA about how can reef aquarium hobbyist help to spawn corals in their tanks. Richard currently works with Rebeca Albright's lab at the California Acadamy of Science where he is focusing on Coral Spawning.

Coral spawning is a big thing because of the condition where coral sare at now. There are areas in Florida where 90% of the cover coral had died away completely. Corals are in trouble, and if we can master the ability to respawn them, we can help to rebuild the coral reefs. Not to mention that the process of spawning coral is just cool.

Corals reproduce asexually, and this is the most common way that the hobby is propagating corals. They cut a piece off and glue it to a frag plug or rock. A lot of reef restoration groups are helping restore reefs this way. The issue with restoring reefs this way is that this process is very time-consuming. When spawning corals, you can get over 100,000 laravel in a day. They still have to be grown out but can be done at a much larger scale.

Coral spawning is tied to seasonal events like a full moon. Corals are animals that spawn some of them just also happen top have carbon skeletons as well that keep them in place. While they are in the laravel stage, it's different. The laravel can swim around and find a good place to attach itself forever. When corals spawn, the eggs will float to the top and mix to allow them to fertilize.

Coral Sexual Reproduction - Brooders, this was a common thing a while back, but it never caught on. Pocillopora is one of the common corals used that is easy to do, and it's easy to work with. You need a fist-size peace. The coral will self pollinate and spit out laravel with zooxanthellae already on it. To control the release of the laravel, you can place the coral is a shallow bed and put a micron mesh sleeve over the coral at night. You still want water flow, but you want to trap the laravel in the sleeve. In the morning you can look in the sleeve to see if any laravel is swimming around and you can collect them. Dendrophyllia corals are another good coral that is Brooders.

Hobbyist made it possible to keep Acropora in a home aquarium, and it's incredible the extent that people go through to keep a good environment for their corals. We need more hobbyist who wanted to be involved in coral spawning. The more people involved the more information we will have about the process and the more sucsefuly we can all be.

Jamie Craggs has done a tremendous amount of research and has documented it all. I will provide an overview but if you want all the details to check out his paper Coral Spawning Paper.

So how did we go about spawning corals, we have a small room dedicated to coral spawning. We have a shallow bed with metal halides above it and an aquarium rack with six 67-gallon tanks. You do not need this many tanks, but you need one per species that you want to focus on to allow you to keep the species separate. They also do not need to be this large. The rack or spawning tank needs to be in a dark room; the key here is that you want to be able to control the light.

The corals that we used for our experiments are wild-caught corals that we received a permit to collect from the wild. You could go through the same process and get a permit issued. You can ask a vendor and explain to them what you are looking to do. What you do not want is multiple frags of corals from the colony, the chances are that they would be the same sex. Ideally, if you are collecting, you want to have them several meters apart from one another. We made sure they were at least 50 meters away from one another. Most vendors can ask their collectors to do this for you.

We use Apex Controller to control the coral environment. Here are some of the essential things that we control:

If you are looking to give it a try, the first thing I suggest doing is getting a spawn to happen. Do not worry about collecting them or trying to get them into a fertilized state. You can do that with any corals.

So pick a place and then do some quick research to determine when the sunsets and sunrise schedule is across the year. You need the moonset and rise times for the year as well. You need the day of the new moon, all of this can be done via a simple Google. The next two things can be a little more challenging. You need to get the temperature data for that area and the solar intensity.

Corals usually span a few days after the full moon anywhere from 2-4 hours after the sunset. If you control the light available to your tank, then you can change the time frame so that instead of a coral spawning happening at 9 pm it happens at noon. So to prevent us from being in the office around the clock, we set our environment up to allow the corals to span while we were generally in the office.

So using the Apex we set the Season and setup the Sunrise and Sunset for each month throughout the year. So input the sunset and sunrise time that you identified.

You want to do the same thing with the Moonrise, and Moonset points that you identified. We have the Apex lunar simulation modular. It does not need a ton of light to trigger the cycles.

You then need to set the Day of the New Moon.

You then want to do the same thing for the Temperature. You just set the temp for each month. The Apex will automatically ramp the temperatures up or down for each given month.

Without having an Apex to automatically control all of these settings would have made the process almost impossible haveing to adjust everything manually.

The solar intensity is the same with the intensity reaching its highest points during the summer and then ramping down. This is the only thing that the controller does not control, and we have to adjust manually.

All of our lights run off of profiles; this is what control the intensity lights. We have to make three changes each time, and this has to be done each week.

This is the advanced code that each of the Radion lights is running. The RedFixyture1 is for a light switch that turns on the red lights so that if you need to check on the tanks, you can use the red lights to check out the corals while the views are off.

Out of the list that we follow of things that we feel are important we do not know which one of them is important we just know that when we follow these, we can get a spawning. At the same time, we have had scenarios of hobbyist who get spawnings, and they are not following this list. It could be just one thing from the list that triggers the spawning. We just do not know.

So let's say that you have been successful at getting the corals to spawn and you want to try to make baby corals. The setting is when the eggs are about to push out of the polyps and escape into there environment that they are in. When you think there is going to be a spawning you want to turn off all of the flow in the tanks, if not everything will go into your filtration.

You collect everything and put it into a beaker and then wait about an hour to allow the sperm and eggs to separate. Then you dilute the sperm because too much sperm is no good, then you put them together and get super excited. Once they sit together for about an hour, then they should be fertilized. If you watch it for over 24 hours, you can see each development stage. Then place them into a container with lots of rubble and frag plugs. The laravel will swim around until it attaches to something. Sometimes you will get a group of them that will settle together in a group, and that's ok.

Caring for baby corals can be difficult. Coralline algae can out-compete the baby corals, so you need to be careful. One thing that you will need to do is keep the sub straight clean. We raised baby urchins to be able to do this so if you want to be able to keep things clean, you may also want to look into raising urchins. You do not want to use large urchins or snails because they will rip the baby coral right off.

The baby corals do not need as much light, and having the normal amount of light that you would have on your corals will only encourage algae to overgrow the baby corals.

Try implementing the things that you feel will be easiest to implement and see if you can get a spawning.