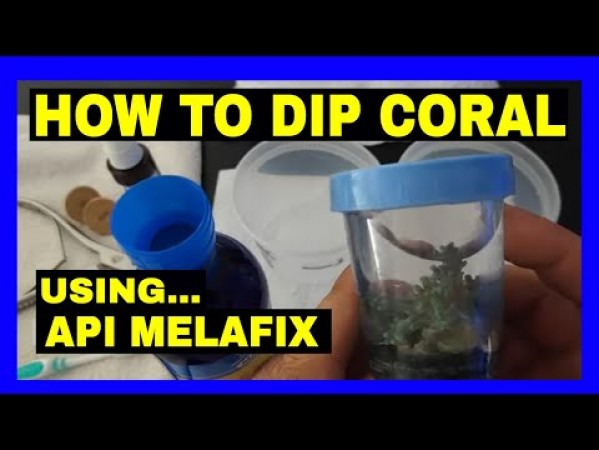 Billy Pipes goes over how to dip corals using API Melafix to dip soft corals.
Every time Billy Pipes get new corals, he likes to float the coral in the sump for about an hour to acclimate the temperature. Billy always keeps extra frag plugs in his sump, regardless of the coral and even if it has encrusted over the frag plug that it came in, Billy aways cuts them off the plug. He replaces the original frag plug with the ones that were in his sump.

Normally all corals get dipped in multiple dip solutions, but now that he is focusing on softies he is planning on using Melafix how most of the corals he plans to get will be leather toadstools, mushrooms he plan to use Melafix.

Up until recently, I assumed the Melafix was only for fish for treating wounds and infections. On the label, it clearly states that it reverses coral desegregation as well. There are two different types of Melaflix one for freshwater and one for marine usage. They are labeled, and one will show freshwater fish, and one will show marine fish. You want to make sure you get the marine version if you plan to dip your corals. Billy only intends to use it on soft corals and has no plans to use it on LPS or SPS corals.

When replacing the frag plug, the new coral is glued on to a new plug using the Dollar Store Supper Glue Gel and the BRS INSTA-SET. I'll place a bit of Super Glue Gel on the plug. Then I set the coral on the Super Glue. Once I have the coral where I want it on the plug, I will spray some of the INSTA-SET in the direction of the showing Super Glue to make it set instantly. Do not worry if any of the INSTA-SET hits the coral how it is coral safe. I also use the Dollar Store Supper Glue Gel to attach the frag plug or coral to the rock structure.

I like to have two containers, one for the dip and then a second one to rinse the coral off in tank water before adding them into my tank.

So the normal process Billy goes through is the following:

The dip that I did on the newly acquired leather corals after it was all done. I looked at the dip container to see if there was anything in it and to my surprise, I found a baby Aiptasia dead in the bottom of the container. I am not sure if it was just luck of it Melafix can also kill Aiptasia, but it seemed to have killed this one.