Can This Coral Kill You 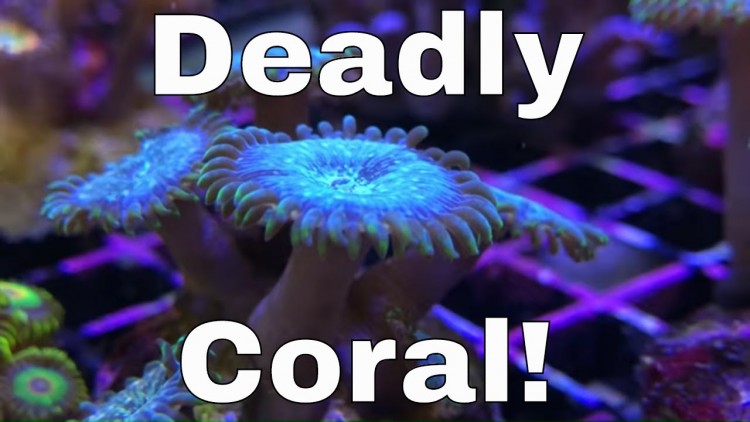 At least once a year there is a news story that pops up each year where a particularly gifted reefer is exposed to something called palytoxins, resulting in a trip to the hospital. Most likely someone maybe even your self was sent the link to the news article from someone previously. Maybe from a concerned loved one or maybe a disgruntled neighbor. Who thinks you may try to use biological warfare against their cat next time it gets into your garden.

The problem with these news articles is that they harm our hobby and are often plan inaccurate information. One of them claimed that the xenia coral was the coral that was the source of the problem. Today I am going to clear up a few things. First thing I want to say is that palytoxin is no joke. While any good fish store should explain what you are buying, in the end, it's your responsibility to research the animals in our tank.

So what is palytoxins? Palytoxins is a toxin produced by the Palyathoa and Zoanthind family of corals. Not all of them have the same toxicity level as others, Palyathoa's also referred to as palys are the more dangerous of the two. However, some people are unable to tell the difference between palys and zoas. It is wise to be cautious when handling both. They are typically considered a beginners corals due to their hardiness, a wide range of colors that they come in and the wide range of prices that they come in.

Like many things in the hobby, they can be accidentally added to an aquarium without your knowledge as a hitchhiker on live rock or even a coral frag plug. So are these coral just a ticking time bomb waiting to go off and nuke your home? Not really, when handled correctly, they are relatively safe. Do not get me wrong. I could not find a recorded death due to palytoxins. If you get a high enough dose it could be lethal, but so could a dog, a knife or a frisbee is placed in the wrong hands.

So how can you protect yourself from palytoxins? As long as you follow these four basic rules, you should not have any issues.

Fortunately, the toxins on the surface can easily be deactivated using simple household bleach. So if anyone uses household food containers to dip their corals, I'm sure someone out there is doing just that. Firstly, stop being so cheap and buy yourself some coral specific containers. Secondly, clean those containers with household bleach to sterilize them and make them safe again.

Just to be on the safe side do not drink the bleach if you are exposed to palytoxins, it does not work like that any will only harm you further.

So if it is so easy to stay safe where do people run into issues? The problem usually occurs when the reefer does something wrong. There are two ways that people get exposed to toxins.

Some of the symptoms of palytoxins are fever, chest pain, difficulty breathing, rapid heart rate, a metallic taste, and tingling in the extremities. There are other symptoms as well, but they alone are fairly common and could be caused by something else. They are a runny nose, cough, sore throat, and head akes. Before you run off to the ER, you might want to experience some of the more serious symptoms that were listed first.

Just a reminder, at the moment I have not found any recorded cases of a hobbyist who died from palytoxins. So we can still enjoy these corals as long as we respect them and take the proper precautions in the hobby. So the next time you are staring at a gobstopper zoa, and you are wondering if they taste like a gobstopper, restrain yourself.