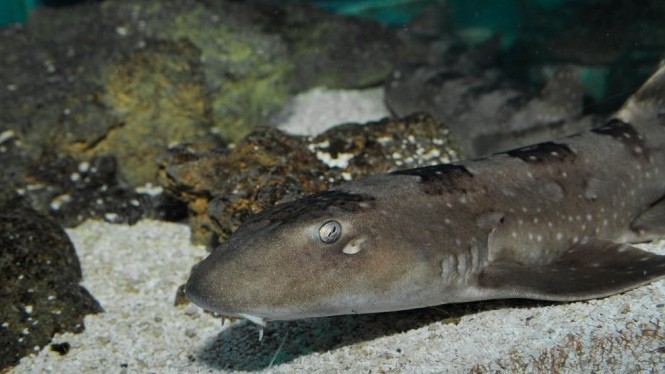 Keeping fish in an aquarium can be very satisfying and relaxing. While marine aquariums are popular, not everyone wishes to try to maintain corals. Fish Only with Live Rock (FOWLR) aquariums are also very popular and allow the hobbyist to keep a large selection of impressive fish that can not be kept with corals. Preditor tanks are also very popular with FOWLR aquariums when considering a predator tank, one of the most common species which come to mind, sharks. While many sharks grow too large for most home aquariums, some smaller species of sharks grow to only a few feet long and can be kept in large to an oversized aquarium.

Sharks really should only be kept by more advanced hobbyists with lots of experience. Sharks are messy eaters, and when feed will degrade your water quality, especially if you do not have the right equipment and filtration system. You need to keep a good eye on your aquarium water parameters to prevent deadly ammonia spikes. It is also wise to keep some of the smaller ideal tank mates with the sharks. The small fish can eat the leftover scraps that sharks leave behind when they eat.

Most sharks prefer lots of open space with a sand substrate with little rock structure in the aquarium. If you do have rock structures, make sure they are well secured, sharks tend to force there way into spaces to try to get to potential food or even to look for food. Live rock helps the bacteria cycle and is needed. You want to keep as much live rock in your sump as possible to grow good bacteria. While some sharks are active during the day, but almost all sharks are active at night as they hunt. Some species hardly move during the day at

While some sharks stay small and can be kept in home aquariums, keep in mind, the needed aquarium is still considered a large or very large aquarium. These sharks are considered small in retrospect to other sharks but will still grow to several feet long. Some of the more commonly found sharks in the aquarium industry include; Black Banded Cat Shark, Northern Wobbegong, Epaulette Shark, Horn Shark, and Nurse Shark.

Keep in mind that any invertebrates in the aquarium at some point will most likely become a meal for saltwater sharks. If you pair a shark with the wrong species, they can become their next meal, so it's essential to have the appropriate tank mates. Some of the more popular species that can live with sharks are other Small Sharks, Some Eels, Stingrays, Squirrelfish, Hawkfish, Groupers, Cardinals, Trigger Fish, Harlequin Tusks, Goatfish, Batfish, Lionfish, Snappers, Jackfish, Rabbitfish, Scorpion Fish, and Hippo Tangs. The condition is that the tank is large enough.

While some people keep Pufferfish with sharks, it is not recommended. Pufferfish have been knowing to bight the sharks eye and damage or blind them or even kill small sharks.

Sharks can give birth to their live young, or they can lay eggs, that rights eggs. Some sharks eggs are stored within the female, and when the young sharks come out, it looks as if the female gave birth. Even the largest shark, a whale shark lays eggs. Roughly 30% of all shark species lay eggs. Most of the shark species that are kept in the aquarium hobby lay eggs.

Just like a chicken egg, each egg has an embryo and a yolk sack. The eggs, unlike the chicken eggs that are surrounded by a frail shell, shark eggs are covered in almost a leather casing that is watertight, keeping pray out and the sharks safe. You can even use a bright light to see the different stages of the shark and also see it move in the egg. Their umbilical cord attaches to the yolk sack as it is their source of nutrients, and as they get bigger, the yolk sack will get smaller.

It is common to find washed up empty shark eggs on the beach.