5 best LPS species to introduce in your tank

Large Polyp Stony (LPS) belong to the order of Scleractinia. They are considered the reef builders of the ecosystem because of the calcium carbonate skeleton that they secrete by the epidermis at the base of each coral polyp.

Another characteristic is that they tend to be zooxanthellate, or host symbiotic photosynthetic algae call zooxanthellae in their tissue. The host coral benefits from the glucose and nutrients produced as byproducts of photosynthesis and the algae are (mostly) safe from the many grazers that keep algae from outcompeting corals for space and sunlight on the world’s reefs.

If the polyps start to brown, carefully expose the colony to a bit lighter.

It is Important to observe the posture and turgidity, or swollenness, of the polyps. If the polyps are really stressed, they appear droopy, and the flesh is retracting from the margins of its skeleton. These corals are quite stressed and while it may not be dying.

Once the parameters have been established, we can introduce our LPS into the tank.

5 best species to introduce in your tank?

Caulastrea or Candy Cane corals is quite easy and is often recommended as a good starter coral. They tend to be some of the hardiest large polyp stony (LPS) corals and grow into large colonies relatively quickly.

Candy Cane corals are characterized with a skeletal structure consisting of tubular stalks with stars on each tip and the plump circular polyps are vibrant green, yellow, or blue and brown.

Lighting: Moderate and Moderate to High

Flow: Moderate and Moderate to High

Temperature: Peaceful to Semi-aggressive (range of 75o to 82o Fahrenheit).

Trachyphyllia or Open Brain Corals are LPS corals where the genus Trachyphyllia, comes from the Greek trachys (rough) plus phyllon (leaf) because it resembles a rough leaf lying on the sandy bed. Brain Corals fluoresce brightly under actinic lighting.

They do best in a well-established reef aquarium that incorporates moderate to strong lighting with a moderate water current, along with the addition of calcium, strontium, and other trace elements to the water. They do not require additional food to maintain its health in the reef aquarium, but it will feed on micro-plankton or foods designed for filter feeding invertebrates.

Open Brain Corals need a alkaline pH 8 to 11 dH, 10 is recommended. Magnesium levels  1200 - 1350. Magnesium makes calcium available, so if your calcium is low, check your magnesium levels before adding any more calcium.
Lighting: Low to moderate 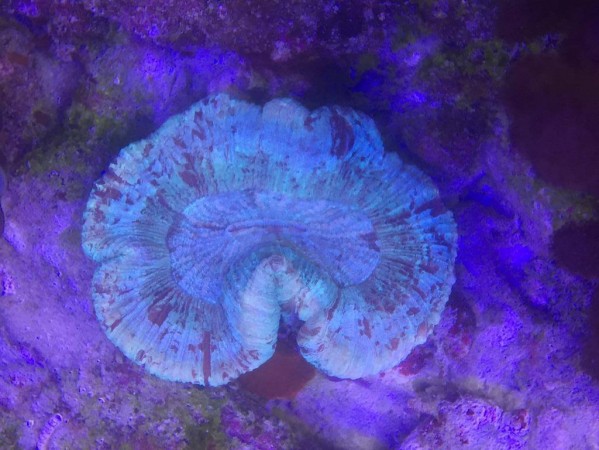 Favites corals are massive grow as a mound, the colonies are round or dome-shaped. They are similar to the genus Favia but the main difference between the two genera is that corallites of Favites share a common skeletal wall, whereas the corallites of Favia have two distinct walls. During the day, the tissue of the Favites genus is expanded. Consequently, some of the Favites can superficially resemble Favia corals since it can be difficult to see the distinction between the corallite walls. At night however, the tissue deflates somewhat, showing the wall differences.

The Favites Coral is relatively easy to care for, making them an excellent choice for the beginner.These corals, with their variety of color, are actually tolerant of several lighting conditions, though higher light is preferred.

Lobophyllia or Lobed Brain Coral are one of the easier stony corals to keep in that they do not have strict lighting or flow requirements, are easy to feed, and are relatively tolerant of a variety of tank conditions.

The colonies can be a branched formation where the corallite (main polyp) walls are tall and separate from the others, coming up from the skeleton of the colony like a single branch. The other formation is when the colony has corallites with long winding valleys, but each corallite or polyp has its own separate walls. The colony is generally flat with the polyps tops being in the same plane.

Lobed Brain Coral is easy to care using moderate lighting and moderate water flow that is turbulent.  The polyps tentacles come out at night to feed.

The following water supplements are suggested for Lobophyllia species: Trace elements and iodine may also be added.

Euphyllia or Torch corals have long tentacles that terminate in a single brightly colored tip giving them the appearance of a lighted torch as they sway with the currents. The colors of the tentacles can be chocolate brown, gray-blue, or gray-green with cream, green or white tips. When feeding, the individual tentacles can elongate 2 to 3 times their normal state. Some colonies can reach over 3 feet (1 m).

Lighting: Moderate to strong, yet diffused light, but no direct metal halides.